Trump the chosen one? So says Rick Perry 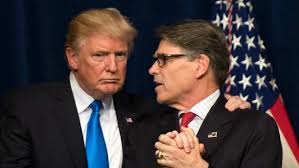 Even as he prepares to step down as the Trump administration’s Energy Secretary, Rick Perry is making headlines for his praise of President Trump.  And for his religious comparisons.

THE FINAL COUNTDOWN: Rick Perry is just days away from leaving the Trump administration. And while the Energy secretary has become enmeshed in the impeachment investigation because of his energy outreach in Ukraine and the pressure from U.S. officials on the country’s president to investigate former Vice President Joe Biden and his son Hunter, he generated a fresh round of headlines on Monday for praising President Donald Trump as the “chosen one.”

“God’s used imperfect people all through history,” the former Texas governor told Fox News. “King David wasn’t perfect, Saul wasn’t perfect, Solomon wasn’t perfect.” Perry said he gave Trump a “one-pager on those Old Testament kings about a month ago.” He added: “I said, ‘Mr. President, I know there are people that say you said you were the chosen one and I said, ‘You were.'” Perry added that he thought former President Barack Obama was also chosen by God.

The comments raised eyebrows on Monday, but it’s not the first time he’s discerned divine intent: While governor in 2010, Perry said the BP Deep Water Horizon oil spill in the Gulf of Mexico might have been an “act of God.”

The secretary has said his last day as secretary will be Dec. 1 and he finished up his last meeting at the White House on Monday. “Just finished my last official duties at the @WhiteHouse. What a great ride it has been!!” he said in a tweet. “Thanks to all. Happy Holidays & God Bless.”

A spokesperson for Perry told ME he was at the White House to participate in a bilateral meeting with Bulgaria — the Eastern European country that is working to complete its stretch of the TurkStream pipeline next year that would transport Russian gas around Ukraine and through Turkey. A joint statement from the White House and the prime minister of Bulgaria touted energy security. “We underline our common understanding that the diversification of energy sources is a guarantee of energy security, independence, and competitiveness for our economies,” it said.