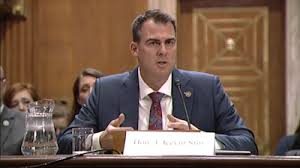 Oklahoma Gov. Kevin Stitt added his support this week to calls by some in Congress to prevent states from using the Clean Water Act to block energy projects.

He told the U.S. Senate Environment and Public Works Committee that states should not be allowed to “politicize” the Act and “harm the assets of other states.”

He gave his support to a bill offered by Wyoming Sen. John Barrasso to limit the scope of the Clean Water Act.

“The current proposed rule, and the opportunity to strengthen it legislatively, does nothing to prevent Oklahoma’s regulators from properly and scientifically considering whether a project negatively affects water quality in our state,” he told the committee. “A clear scope and a reasonable timeline are not invasive to states’ rights.”

He cited as an example of how states can wrongly use the act when a Russian tanker “absurdly” delivered natural gas to northeastern states last winter because the states would not approve natural gas pipelines.

Oklahoma Sen. Jim Inhofe is a senior member of the committee and joined in the questioning of Stitt and other witnesses on Tuesday.

Inhofe: Thank you Mr. Chairman. Governor Stitt, as you said in your testimony, Oklahoma has been on the front lines in America’s energy and independence. And it’s worked. America leads the world in oil and gas production and we’ve done all of this while reducing pollution and leading the world with the cleanest drinking water. You’ve already talked about that. Let’s talk about the economic impact of energy produced in Oklahoma. One in five jobs are tied to oil and gas production where the average salary in this industry is over $94,000. So, Governor Stitt, what would happen to Oklahoma’s electricity and energy prices if natural gas production ceased to exist?

Inhofe: Yes. Now, let’s talk about other states. How can Oklahoma help lower cost of other state’s electricity and energy bills?

Inhofe: Help them the same way it’s been helping us for a long period of time.

Stitt: Absolutely. And I just want to tell you one other fact that I think is significant. Since 2011, Oklahoma has reduced its emissions by nearly double the national average. Sulfur dioxide is actually down by 56 percent. Nitrogen oxide is down by 69 percent. Carbon dioxide is down by 37 percent in Oklahoma. So, we are definitely leading the way in our emission reductions.

Inhofe: Yes, we have. And you can’t overlook the president’s policies and how successful they’ve been. A lot of our colleagues often claim that Republicans don’t care about the environment and it couldn’t be further from the truth. As you point out, since 1970, combined emissions of the six pollutants dropped by 74 percent, while the economy grew by 275 [percent.] Now this is even more astonishing, when you look at since 2005, the U.S. energy related CO2 emissions fell by 14 percent while global emissions increased by over 20 percent. That’s hardly believable. So, is there anything that you have not spoken to already on what Oklahoma has done to protect water quality because we’ve got the best that is out there.

Stitt: Yes, I love the stats in our state and I’ve already outlined them about pipeline capital of the world but we’ve got the cleanest water and the reduction. We’re number one in several categories in reducing non-point and also nitrogen into our water bodies. So, just excellent success stories in Oklahoma.

Inhofe: Yes, it really is. In fact this morning my wife was pointing out on one of the bottled waters, that it came from Tahlequah, Oklahoma. Anyway, we are doing a great job, let’s try to share that with others.