From Oklahoma to North Dakota—another wind farm for ALLETE 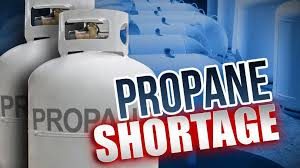 Eight states are facing a propane shortage and the Federal Motor Carrier Safety Administration has declared a regional emergency.

The emergency was declared in Kansas, Illinois, Iowa, Minnesota, Missouri, Nebraska, South Dakota and Wisconsin. Oklahoma is not included.

The propane shortage has hit corn farmers the hardest as they can’t find enough to dry the corn crop according to a report by Progressive Farmer.

Governors in Iowa, Minnesota, Missouri and Wisconsin issued emergency declarations to lift restrictions on carriers for the transportation of heating fuel, including propane. This is expected to help alleviate supply issues in the region.

As of late in the week, most reports of supply problems were focused on Iowa and Minnesota.

Seth Meyer, University of Missouri at Columbia research professor and agriculture policy researcher, said for many farmers, the added drying costs from propane supply issues couldn’t have come at a worse time.

But unlike the propane shortage of 2013, he said, there is plenty of supply available across the country now.

“In 2013, there was a general shortage of propane across the country,” Meyer said. “This year, there is propane — it is just sitting down in the Gulf (of Mexico). So Kansas is a central distribution point, it flows to storage elsewhere. This year, there are large supplies in the Gulf; in 2013, there were limited supplies U.S.-wide. We also had a bit of a delay in corn harvest. But, again, (grain) drying isn’t the big use, it is home and ag (building) heating. So you are likely to have a short-run crunch as supplies adjust this year, whereas in 2013, we simply didn’t have it.”

Even if some farmers are willing to pay a little extra for propane, Meyer said, current commodity prices make any added expense a burden.

“I suspect for some folks the timing will simply be very poor,” he said. “They want to harvest in a window and dry down but cannot get the LP. And remember: In 2013, commodity prices were very good, so it ‘paid’ to get it out of the field and dry it. … This year, with current corn prices, making a decision to pay and dry down, or having the decision made for you for lack of supply, is a hit.”

Data from the U.S. Energy Information Administration released  shows United States propane supplies are still near a five-year high. However, Midwest supplies are down from last week and down 6% from one year ago.