Oilman among honorees in Oklahoma Hall of Fame 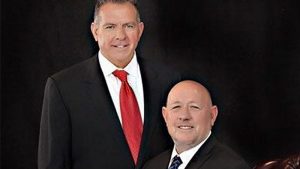 Permian billionaire investors Farris and Dan Wilks in North Texas might be wondering about where they put their money after at least one company has filed bankruptcy, another is considering it and others have faltered in the past few years. Some of those investments have Oklahoma connections.

The two became billionaires when they sold their Texas fracking company in 2011 for $3.5 billion. But many of their more recent investments in the Permian Basin have turned to dust according to a report by Bloomberg News.

The brothers put some of their fortune into Cisco, Texas-based Wilks Brothers LLC to invest in various businesses, including natural gas producer Approach Resources Inc. The shale driller sought bankruptcy protection Monday after 4 1/2 years of losses, erasing more than $110 million of the Wilkses’ wealth.

That follows the recent implosion of at least two other firms in which they invested — Alta Mesa Resources Inc. and Halcon Resources Corp. — after the shale boom went bust for explorers that piled on debt as gluts of crude and gas depressed prices. Alta Mesa Resources Inc. was formed in 2018 when it combined the core upstream assets of Alta Mesa Holdings, LP with the gas processing assets of Kingfisher Midstream LLC. It has been an active player in the STACK.

Eight of the 10 biggest holdings in a portfolio spanning more than 50 investments for the brothers have dropped since June 2018, when they were worth almost $1 billion. In a filing last week, they reported stakes in just seven entities worth a total of only $35.7 million. The combined value of those remaining holdings plunged by $171.2 million, or 88%, since they were initially disclosed.

The brothers didn’t reply to messages seeking comment. Morgan Neff, Wilks Brothers’ chief investment officer, left this month after more than four years on the job, according to his LinkedIn profile. He didn’t respond to a message seeking comment.

The brothers make unlikely billionaires. They followed in their father’s footsteps to become masons in a rural swath of North Texas and used insights about manipulating stone in 2002 to create Frac Tech Holdings, which combines high-pressure jets of water, sand and chemicals to smash oil- and gas-soaked rocks miles underground.

Shale impresario Aubrey McClendon’s Chesapeake Energy Corp. bought a 25.8% stake in Frac Tech at the height of the shale gas frenzy in 2006, helping turn it into the world’s fourth-largest fracking firm. Five years later, the Wilkses sold their remaining 74.2% holding of Frac Tech to a consortium led by Singapore’s Temasek Holdings Pte for $3.5 billion.

The brothers used their fortunes to purchase hundreds of thousands of acres of ranch land in five states. They became the top property owners in Montana and Idaho, according to the Land Report, and faced criticism for gating roads previously open to the public in Boise National Forest. An expanse of more than 11,000 acres around one closed road is now on the market for $10.3 million.

They’ve also invested heavily in Republican politics, including support for President Donald Trump. In 2016, the Wilkses set up a super-PAC with $15 million of their own money to support the presidential campaign of U.S. Senator Ted Cruz. This year, they each contributed $50,000 to the Trump Victory PAC and $44,400 to the Republican National Committee, according to Federal Election Commission records.

Farris Wilks was the long-time leader of the Assembly of Yahweh, a nondenominational church outside of Fort Worth that was founded by his grandfather. Its congregants observe the Sabbath on Saturday and adhere to kosher dietary rules. Farris has preached against homosexuality and abortion, according to a 2015 Reuters report. As for climate change, he told congregants in a 2013 sermon that it’s God’s will.

Even after the oil-market crash of 2014-2016, the brothers continued to invest in Permian Basin explorers and related industries such as companies that supply sand and other materials used in fracking the region’s vast shale formations.

Although oil prices have rebounded since, they haven’t fully recovered as an overabundance of crude has overwhelmed local pipeline capacity, gutting profits and cash flows.

Things were even worse for companies with wells that produced a lot of natural gas: a massive oversupply of the fuel forced some West Texas drillers to choose between shutting down production or accepting negative pricing — effectively paying someone else to take their gas.

The Wilkses’ post-crash investment optimism has proven to be misplaced.

Carbo Ceramics Inc., the Houston-based frack-sand supplier that counts the duo as it’s second-biggest investor, warned this month that it may fail as a going concern after its biggest customer halted purchases. The stock has plunged 72% since the Nov. 8 announcement.

Carbo and other oilfield-services companies are seeing demand evaporate as explorers rein in spending to mollify investors insisting they prioritize shareholder returns over production growth.

Still, the brothers do have at least one big advantage, said Neal Dingmann, an analyst at SunTrust Robinson Humphrey.

“Time is one their side,” he said. “If they had bought this on private equity’s dollar they would be on the clock. Because this is their own money, then they’re on their own time frame.”