A nervous wait for pensioners at bankrupt coal company

Permian drillers depending more and more on wind farms for electricity 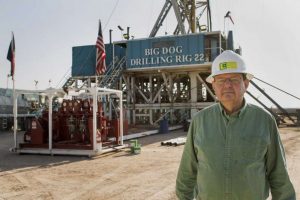 Wildcatters in the oil and gas business pride themselves on being independent, tough and resilient.  Midland, Texas billionaire Autry Stephens must be one of them.

The Houston Chronicle reports on his aggressiveness in the Permian Basin.

The drilling permits speak for themselves.

Wildcatter billionaire Autry Stephens is not ceding control of the Permian Basin to the oil majors without a fight.

Over the past week, the Midland billionaire’s oil company Endeavor Energy Resources filed for 21 drilling permits with the Railroad Commission of Texas, the state agency that regulates the oil and natural gas industry. A large and independent oil company, Endeavor is seeking permission to drill 11 horizontal wells on its Kraken leases in Howard County and another six split between a pair of leases on its Carbon and Kennett leases in Upton County.

Drilling to total depths up to 12,000 feet, the wells target the oil-rich Spraberry field of the Midland Basin, a heavily-drilled subregion of the Permian Basin.

Endeavor’s push comes when the company is competing against other big Permian Basin players such as Exxon Mobil, EOG Resources, Shell, Occidental Petroleum and Chevron for dominance in the region. So far this year, Endeavor has filed for 272 drilling permits — all of them in the Permian Basin.

Headquartered in Midland, TX Endeavor Energy Resources, LP employs over 1,300 workers as one of the city’s largest private employers.  With over 35 years of experience in the Midland Basin Endeavor re-focused its development strategy in 2016 on a new horizontal drilling program.  Relying on the strength and depth of its resources to execute a horizontal program Endeavor has reduced drill time, lowered LOE, and hit record production for the company.