Encana to move headquarters to Denver and change company name

More oil and gas rigs taken out of action in Oklahoma and across the U.S. 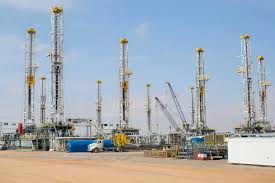 Rig counts are still falling across the U.S. and in Oklahoma, the number fell by 3 in the past week to reach 51. A year ago, Oklahoma had 144 active oil and gas rigs in the state.

Oklahoma’s rig count of 51 compares to 416 in Texas where the count dropped by two in the past week. A year ago, Texas had 533 active rigs.

The Red Top Rig Report from the Independent Oil and Gas Service in Wichita reported the Kansas rig count was down one to 29. The state had 40 a year ago.

The Granite Wash play in western Oklahoma and the Texas Panhandle has no active rigs pursuing new energy. It is the first time in many months since the GW was void of any rig activity.

The Mississippian in Oklahoma and Southern Kansas dropped by one rig and has only two this week. The Ardmore Woodford remained at one rig while the Arkoma Woodford stayed at three.

The Permian Basin lost one rig to hit 416. The Williston in North Dakota remained at 53. The Eagle Ford in South Texas stayed at 63.