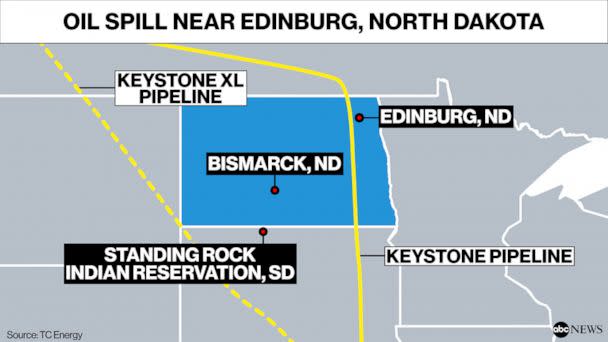 An estimated 9,120 barrels of crude oil have spilled from a leak in the Keystone pipeline in North Dakota this week, officials said.

That’s equivalent to about 383,000 gallons of oil, which could fill more than half of an Olympic-sized swimming pool.

The leak was detected Tuesday night near near Edinburg, a tiny community northwest of Grand Forks. The spill has impacted a wetland area, according to a press release from the North Dakota Department of Environmental Quality.

Parts of the Keystone pipeline, which carries crude oil from the tar sands of Canada through several U.S. states, were shut down as emergency response teams rushed to the scene. The oil spill affects an area of about 2,500 square yards of land, or less than half the size of a football field, according to a press release from TC Energy, which operates the pipeline.

The company, formerly known as TransCanada, said that air quality, water and wildlife monitoring is underway in the region, and there have been no reported injuries or impacted wildlife.

Although TC Energy gave the initial estimate of oil spilled, the Alberta, Canada-based company noted, “We will not have the exact figure until oil recovery has been completed.”

“Our crews will remain focused on oil recovery and then prepare to make repairs to the pipeline,” TC Energy said in a statement. “We will provide updates as they become available.” 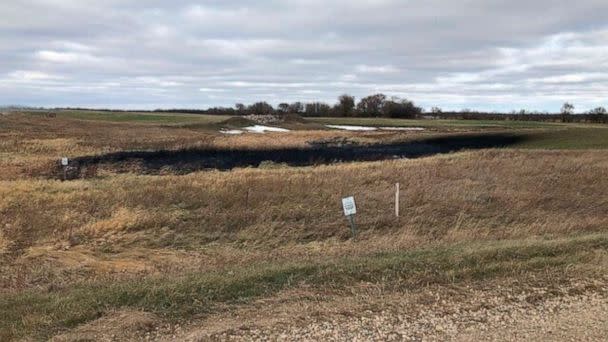 The cause of the spill remains under investigation.

In November 2017, an estimated 210,000 gallons of crude oil leaked from the Keystone pipeline onto agricultural land in a rural area of South Dakota, near the border with North Dakota.

The $5.2 billion pipeline was activated in 2010 as part of a system that also is to include the proposed $8 billion Keystone XL pipeline, which is designed to transport the oil from Canada down to the Gulf Coast. The project has prompted protests and legal challenges by indigenous rights groups and environmental organizations.