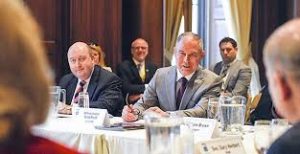 The former aide to Oklahoma U.S. Sen. Jim Inhofe who was named the EPA’s chief of staff has come under an inspector general’s investigation whether he destroyed internal documents that should have been retained. The probe also involves actions concerning former EPA administrator Scott Pruitt.

Using two people as sources, POLITICO reported that Ryan Jackson, who once was Sen. Inhofe’s Chief of Staff has fallen under investigation. The IG is asking witnesses if Jackson routinely destroyed politically sensitive documents. Among the documents are letters from lobbyist Richard Smotkin, the man who helped arrange a trip for former EPA Administrator Scott Pruitt to Morocco.  Pruitt, the former Oklahoma Attorney General, later resigned amidst political allegations against him.

POLITICO reported the probe came after the EPA’s internal watchdog accused Jackson of refusing to cooperate with other ongoing investigations. He was told that document destruction was improper according to one official who spoke with POLITICO.

“They would scold us on a daily basis and Ryan would say, ‘Oh, I didn’t know, we’ll do better next time,’” the former official said.

Jackson joined EPA after nearly 20 years working in the U.S. Senate, first as counsel to the U.S. Senate Environment and Public Works Committee, and later as chief of staff to U.S. Senator James Inhofe (R-Oklahoma). As the staff director of the Committee, he coordinated a legislative and oversight plan for Chairman Inhofe that resulted in:

Jackson told POLITICO he was “unaware” of the IG investigating him for destroying documents. He didn’t respond to a further request for comment.

Michael Abboud, an EPA spokesperson, disputed the allegations, noting that a previous investigation had not found evidence of illegal document destruction at the agency.

“Even the National Archives have publicly stated these claims are ‘unsubstantiated,'” Abboud said in a statement. “Politico choosing to run this story on the baseless claims of one disgruntled former employee does not make it true. EPA takes record retention seriously and trains all employees (career and political) on proper protocols and will continue to follow them.”

The interest in whether Jackson destroyed records may indicate renewed interest in allegations that Pruitt kept a “secret calendar” to hide controversial meetings with Republican donors or industry officials. In July 2018, CNN reported that Pruitt aides would regularly “scrub” his calendar, but a subsequent investigation by the National Archives and Records Administration ended in January and found no evidence of wrongdoing.

EPA’s Inspector General’s Office has launched numerous probes into Pruitt and Jackson, but it is not clear which of those inquiries involves alleged document destruction.

Jackson is also facing allegations of stonewalling the internal watchdog.

This week, acting Inspector General Charles Sheehan accused Jackson of defying investigators by refusing to fully cooperate with two probes. One instance detailed by Sheehan involves an attempt to find out how and where Jackson obtained the testimony of Deborah Swackhamer, the former chairman of EPA’s Board of Scientific Counselors. She had alleged that she felt “bullied” by Jackson’s attempt to get her to stick to pro-Trump administration talking points at a congressional hearing.

A spokesperson for the IG declined to comment on the subject of ongoing investigations.

As POLITICO was reporting this story, a number of people close to Jackson reached out unprompted to say they had never seen him destroy documents, but would only speak on condition of anonymity.

“Having worked with Ryan on a near daily basis, I never witnessed or heard of any of these allegations and it would be uncharacteristic of him to do,” said a Trump administration official.

A former senior EPA official also said: “Ryan Jackson has spent his entire career in public service, managing hundreds of staff over more than two decades. To suggest that Ryan Jackson is anything other than a professional and esteemed public servant who is committed to his staff and the Agency’s mission is pure slander.”

“There’s nobody who’s more meticulous in his record keeping and in his notes and in his checklists,” another senior EPA official said. “Everybody on day 1 had records training and to the extent that somebody deviated from that, that’s on them for themselves because they all signed that paperwork and they all had to certify that training.”

Officials who are found guilty of “willfully and unlawfully” violating the Federal Records Act and unlawfully destroying federal documents can be fined and face a jail sentence of up to three years. The IG can’t prosecute any criminal violations of the law but can refer matters to the Justice Department. Jackson has not been accused of breaking any laws.

Sheehan sent a letter to EPA Administrator Andrew Wheeler calling stonewalling of investigations a “serious or flagrant problem.” Jackson said he has regular interaction with the IG and his staff.

Swackhamer, a retired environmental chemist at the University of Minnesota, said two years ago that she felt pressured by Jackson to downplay Pruitt’s decision not to reappoint many members of Board of Scientific Counselors when she was appearing before the House Science Committee. Pruitt later removed her as chair of the board, which provides advice to the EPA on its research and development work.

Jackson defended his decision to reach out to Swackhamer before she testified, saying in a letter to Wheeler this week that he wanted to ensure she was “fully informed” about the status of board appointments.

Alex Guillén contributed to this report.