Virginia-based AES Corporation, the firm that sold its power operation in eastern Oklahoma earlier this year reported a large jump in earnings per share for the 2019 third quarter.

The company had revenue of $2.63 billion and its third-quarter profit totaled $210 million. The results were better than what Wall Street analysts predicted.

Earnings per share reached 32 cents, an increase of 17 cents compared to third quarter 2018. The company explained the earnings increase was due to a number of factors, including and 11-cent impairment at the Shady Point in Oklahoma in 2018.

It was in the spring of 2019 that AES sold Shady Point power plant to Oklahoma Gas and Electric Co. for nearly $27 million. The 360-megawatt coal-fired plant is located near Poteau in eastern Oklahoma. 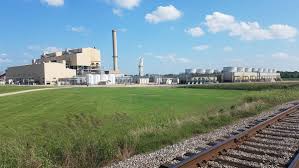 AES President and Chief Executive Officer Andrews Gluski said based on the strong third quarter earnings, the company’s 2019 guidance is reaffirmed and it still expects 7% to 9% average annual growth rate through 2022.

AES shares have climbed 19% since the beginning of the year, while the Standard & Poor’s 500 index has increased 23%. The stock has climbed 14% in the last 12 months.