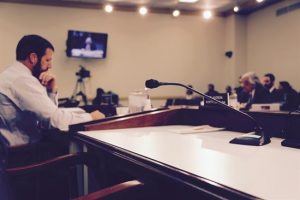 The U.S. House Energy and Commerce Committee, of which Oklahoma Rep. Markwayne Mullin is a member, is to vote this week on several energy and environmental bills. One is a proposed effort to improve the safety of pipelines.

The measure would also reinstate a 2016 EPA final rule that set limitations on methane emissions across the natural gas and hazardous liquid pipeline sector.

A bill by Democrats Debbie Dingell and Fred Upton, both of Michigan would target the controversial PFAS chemicals that are contaminating military installations in the U.S.

Other bills will focus on an asbestos ban, the Yucca Mountain Nuclear Waste site and the FCC.

“—– the Energy and Commerce Committee takes another significant step to protect consumers and the public health, strengthen our economy and secure our infrastructure,” Pallone said.  “We will markup legislation to address the youth tobacco epidemic, improve maternity care, and protect Americans from toxic chemicals and scams.  We’re also going to make our pipelines safer and more climate resilient, secure our communications networks, fix broadband maps, reauthorize our media laws and support American businesses.  Our five legislative subcommittees have been hard at work on these bills, and we look forward to marking them up at the full Committee on Tuesday.”