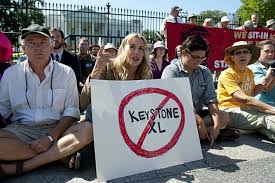 The Guardian newspaper reports agencies have privately discussed tactics to stop activists “by any means” and believe the demonstrators could pose “domestic terrorism” threats.

Internal government documents seen by the Guardian show that police and local authorities in Montana and the surrounding region have been preparing a coordinated response in the event of a new wave of protests opposing the controversial Keystone XL tar sands pipeline, which would carry crude oil from Canada to Montana, South Dakota and Nebraska.

Click here to view entire story from The Guardian.