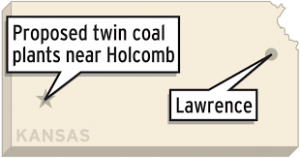 An attempt by Sunflower Electric Power Corp. to begin construction of a new coal-fired power plant in southwest Kansas is not only drawing criticism but is facing a construction deadline.

The company has until March 2020 before a renewed construction permit expires for the proposed Holcomb 2 plant and state regulators have said they won’t allow any more time. Sunflower Electric sought the 18-month renewal so it could “finalized arrangements” for construction.

Reports by the Kansas City Star and Wichita Eagle indicated documents show the company maintains there is “significant interest” in building the plant to be located west of Garden City.

Sunflower Electric already operates one plant near Holcomb and proposed to build an adjacent $2.2 billion, 895-megawatt facility. Sunflower Electric and its partner, Tri-State Generation and Transmission Association, have together invested more than $100 million into the project.

“Sunflower and our project partner continue to explore project options,” the company said in a statement this week. “Neither Sunflower nor Tri-State will advance the project unless it is determined that the expansion remains in the best interest of our members.”

In an August 2017 filing with the federal Securities and Exchange Commission, Tri-State said it “assessed the probability of us entering into construction for the Holcomb Expansion as remote.”

When it requested the permit extension, Sunflower Electric acknowledged it and Tri-State no longer need the electricity that would be produced by the new coal plant. The company said that since the Supreme Court decision it has been looking for others to purchase power from the plant.

Proponents of the coal plant, called Holcomb 2, say the project would bring jobs to the area. But environmentalists object to the facility, citing greenhouse gas emissions that contribute to climate change.

No new coal-fired plants have been brought online in the U.S. since 2015 and there are none under construction.