Inhofe introduces his version of a defense spending bill 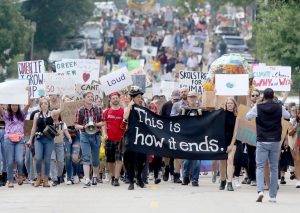 A Senate committee in Wisconsin is following Oklahoma’s effort at targeting protesters who trespass onto land owned by oil and gas companies and pipelines.  It has approved bipartisan legislation to make it a felony.

The Senate Committee on Judiciary and Public Safety approved the measure this week and sent it to the full Senate. A similar version of the bill already was passed in the Assembly which is Wisconsin’s version of the House.

Currently, trespassing on or causing damage to an energy provider’s property is a Class H felony, punishable by six years of prison, extended supervision and a $10,000 fine. The bill in question would expand the definition of an energy provider to include gas, oil and petroleum companies, as well as the pipelines containing those fuels.

Supporters say the bill is designed to protect critical infrastructure and utility workers, while also guarding the right to protest, but more than 20 environmental groups — including Midwest Environmental Advocates, Wisconsin Resources Protection Council and the Wisconsin chapter of the Sierra Club — have opposed the bill, arguing it would silence groups that protest pipeline projects, reported the Wisconsin State Journal.

The bill would expand existing protections already granted in state law to electric utility companies to also include gas or oil companies and their pipelines, water utilities and other energy generation, storage and transportation systems.