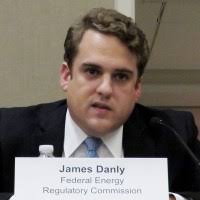 Danly was appointed as the Commission’s general counsel in 2017 after serving as an associate attorney in the energy regulation and litigation division of Skadden Arps. He served as a law clerk to Judge Danny Boggs at the U.S. Court of Appeals for the Sixth Circuit. Danly also served as managing director of the Institute for the Study of War, a military think tank in Washington, D.C. and completed an International Affairs Fellowship at the Council on Foreign Relations.

Danly is a 2013 graduate of Vanderbilt Law School. He earned a bachelor’s degree from Yale University. Danly previously served two tours of duty in Iraq, receiving a Bronze Star and Purple Heart as a former U.S. Army officer.