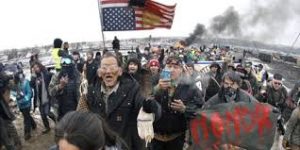 A South Dakota anti-protest law fashioned after one adopted by Oklahoma in recent years won’t be fully implemented. State officials now say they will not enforce part of the laws that critics argued targeted Native American and environmental opponents of the proposed Keystone XL crude oil pipeline.

South Dakota Gov. Kristi Noem and state Attorney General Jason Ravnsborg agreed against enforcing parts of the law that would criminalize “riot boosting” which applied to protesters and supported who encourage but don’t take part in acts of “force or violence.”

As Inside Climate News reported, the settlement makes permanent a temporary ruling issued by a federal judge in September.

“People can continue to organize and show up in public places and speak out against these projects without any fear of retribution or being identified as rioters and face potential felonies,” said Dallas Goldtooth, an organizer with the Indigenous Environmental Network and a plaintiff in the lawsuit that challenged the rules.

“I think it’s immense,” he said. “We have legal precedent that is shooting down these anti-protest laws that are being replicated across the country.”

At least seven other states have passed harsh penalties for protesting near oil or gas pipelines or interfering with the infrastructure since the start of the Trump administration, according to the International Center for Not-for-Profit Law, which tracks the legislation. Several of those laws were based on a model bill promoted by the American Legislative Exchange Council, an industry-backed group.

Oklahoma’s anti-protest measure was signed into law in the spring of 2017 by then-governor Mary Fallin. The law increased penalties against protesters who trespass on property containing a “critical infrastructure facility.” Legislative efforts were prompted in part by damaging protests staged by opponents of the Keystone pipeline that was construction in Oklahoma some years ago.

Under the 2017 Oklahoma law, trespassers could face a felony and a “minimum” $10,000 fine if convicted of entering property with intentions to damage, vandalize, deface, “impede or inhibit operations of the facility.” But offenders could also face up to a $100,000 fine and 10 years in prison.

In the wake of the new law, there have been no reports of damaging protests by environmentalists in Oklahoma, even those who threatened to stop the construction of one pipeline that is now in operation.

The joint settlement agreement in South Dakota does not repeal the state’s anti-riot laws. Instead, the governor and attorney general agree never to enforce sections of the laws focusing on speech.

For example, the state will no longer enforce part of an existing law that says a person who does not personally participate in a protest “but directs, advises, encourages, or solicits other persons to acts of force or violence” can be found liable for riot boosting.

Stephen Pevar, a senior staff attorney with the American Civil Liberties Union who represented Goldtooth and other plaintiffs in the case, said the settlement is binding.

“No governor in the future can change this back. If anyone starts enforcing these laws, this would be in contempt of court,” he said.

Goldtooth said the settlement was a victory but warned that the state could always try to enact new anti-protest laws.

When Noem proposed the legislation, she said that she and her team had met with the Keystone XL pipeline’s builder, TransCanada, now called TC Energy, and that the legislation was a result of those discussions. “The legislative package introduced today will help ensure the Keystone XL pipeline and other future pipeline projects are built in a safe and efficient manner while protecting our state and counties from extraordinary law enforcement costs in the event of riots,” she said in a press release at the time.

“I’m not blind to the fact that South Dakota legislators can go back to the drawing board and try to come up with another version of this anti-protest law, but for this lawsuit, it’s a victory,” Goldtooth said.

“It reaffirms our right to peacefully gather,” he said, “and it squashes the attempt of the state to put fear into the hearts of people who are just trying to protect their land and water from fossil fuel projects like Keystone XL.”