Exploration firms find success in STACK and in SE Oklahoma 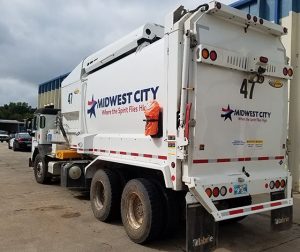 The city of Midwest City continues to roll out its fleet of alternative fuels with the recent deployment of a new refuse truck powered by compressed natural gas (CNG).

The municipality received a grant from the Association of Central Oklahoma Governments (ACOG) to offset the expense associated with supplying the tanks and CNG system for the new vehicle. The grant funding is designed to curtail emissions that pollute the ozone.

The total cost of the new refuse truck including the CNG system was $317,563, according to a report published in The Oklahoman on Thursday. The ACOG grant of $49,834 was awarded in January of 2018.

The city’s Fleet Services Department manages 1,400 pieces of fueled equipment, The fleet is powered by one of the most diverse fuel portfolios in Oklahoma. The city built new infrastructure in 2012 for bio-diesel and ethanol fueling capabilities. It has converted several waste collection trucks and plans to add more CNG vehicles to the fleet. The department is also the first governmental automotive repair facility in Oklahoma to earn the Blue Seal of Excellence recognition from the National Institute for Automotive Service Excellence.