Producers Alliance to meet in OKC 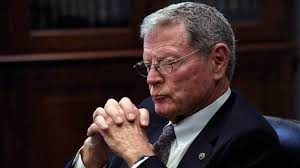 A call by the International Monetary Fund for a worldwide carbon tax to make fossil fuels more expensive has been condemned by Oklahoma U.S. Sen. Jim Inhofe.

“I’ve said it before, I’ll say it again. Controlling carbon is a bureaucrat’s dream because by regulating carbon, unelected officials can control every part of our lives,” said the Senator in response to OK Energy Today’s request for reaction.  “This just shows yet again that it isn’t about environmental goals—it’s about control and promoting a socialist agenda.”

The IMF study claimed there is an urgent need for the global carbon tax as the best way to fight climate change. The  group also said a tax of $75 a ton by 2030 would limit the planet’s warming to 2 degrees Celsius or 3.6 degree Fahrenheit, which is about double what it currently is.

The study also explained that such a high tax would increase the price of fossil-fuel energy and the economic high cost to consumers would be offset by funneling money raised from the tax back to consumers.

“If you compare the average level of the carbon tax today, which is $2 [a ton], to where we need to be, it’s a quantum leap,” said Paolo Mauro, deputy director of the fiscal affairs department at the IMF.

Sen. Inhofe has been a long-time opponent of proposed carbon taxes.