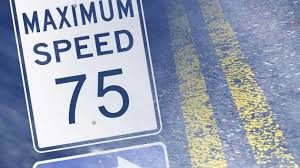 Higher speed limits take effect Friday in Oklahoma with the new speed limit on some highways reaching 75 mph from the current 70 mph limit.

Gov. Kevin Stitt signed House Bill 1071 into law in April. Lawton Rep. Daniel Pae was the House author while Sen. John Michael Montgomery of Lawton was the author in the Senate.

As it was written and approved, the new law will allow speed limits to be increased on parts of turnpikes outside of city limits. But anyone who’s driven the interstates in the past several weeks would think the speed limits had already taken effect.  It was nothing to drive 75 or even 80 mph and still be constantly passed by other drivers.

“While we wanted to increase the speed limit on our turnpikes and state highways, we also worked to ensure the safety of Oklahoma drivers,” Pae said. “We will use traffic and engineering studies that take into consideration things such as traffic density and infrastructure quality to determine where we could safely increase these speed limits.”

Pae said the speed limits in the bill will be implemented gradually, sensibly and safely according to KOCO TV News.

According to the Oklahoma Turnpike Authority, speed limits will not immediately go up on Friday. In conjunction with the Department of Transportation, OTA officials are conducting a speed study across the state, which should be completed some time in the first quarter of 2020.

Once the study is complete, a determination will be made to see if and where speed limits will be able to safely be increased across the state, OTA officials said.

Oklahoma has been the only state in the region to remain with a 70 mph speed limit for several years. Texas, Arkansas, Kansas, New Mexico and Colorado have speed limits of up to 75 mph on most highways.