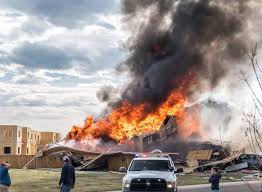 Houston’s Anadarko Co. and the former Kerr McGee company it acquired are likely to face penalties from Colorado oil and gas regulators more than two years after a home explosion in Firestone killed two men.

The Colorado Oil and Gas Conservation Commission announced this week it was preparing to issue a notice of an alleged violation because an Anadarko well and its uncapped flow line were blamed for the explosion.

He said the Commission’s staff will identify which rules were allegedly violated, then consider any fines and penalties. The National Transportation Safety Board ruled on Tuesday that the probable cause was gas leaking from a line running from an Anadarko well that was near the house. Reports indicted the line had been cut but was not capped as a gas tank battery was moved before a housing subdivision was built nearby.

But state regulators want to see the full report before issuing any violation against Anadarko.

“COGCC has not issued a violation in this incident, to date, as we were awaiting the release of the NTSB report should it have had any additional information in it,” said Megan Castle, an agency spokeswoman.

Anadarko obtained the well in October 2013 from Patina Oil and Gas Corp., the NTSB said, according to the Colorado Sun newspaper.

Although a Patina record from 1999 stated the abandonment was completed, COGCC records showed that to be false, federal investigators reported.

“The Colorado Oil and Gas Conservation Commission reviewed the NTSB report released on Oct. 29,” Castle said. “Currently, the COGCC is proceeding with an enforcement against Kerr McGee Oil and Gas Onshore LP and will issue a notice of alleged violation.”

Kerr McGee and Gas Onshore LP is a subsidiary of Anadarko. Anadarko was purchased by Occidental Petroleum earlier this year.

Regulators say if Kerr McGee and Gas Onshore LP agrees with the alleged violations, then they will be resolved through a consent order that would have to be reviewed and voted on by the Colorado Oil and Gas Conservation Commission.

“We are still assessing what are the violations and therefore the associated penalties,” Castle said.

While Anadarko has faced financial consequences from the blast in the form of lawsuits, this will mark the first time it is formally accused of violating Colorado’s oil and gas policies.

The April 17, 2017, explosion killed Mark Martinez and his brother-in-law Joey Irwin. It has been a central focus of the debate on oil and gas safety in Colorado, inspiring new rules and legislation. Martinez’ wife, Erin, was seriously injured in the explosion.