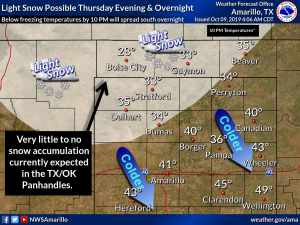 Those working on oil and gas rigs or wind towers in northwest Oklahoma better bundle up because a wintry-like blast is coming!

Snow’s in the forecast for the Panhandle and much colder weather will hit the state. 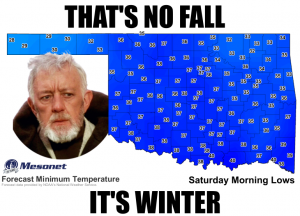 As State Climatologist Gary McManus with the Oklahoma Mesonet put in in his Wednesday morning update, “Mother Nature’s gonna put take cold front, and whop you on the right side of your face, and you wanna know something? There’s not a darn thing you’re gonna be able to do about it.”

And his forecast included a chance of snow.

“Yes, I hate to mix Star Wars and Billy Jack, but sometimes it’s called for. Heck, the Panhandle might even see snow Thursday night into Friday morning!”

Snowfall in the Oklahoma and Texas Panhandles won’t amount to much and very little accumulation is expected.  It’s just enough to remind us that winter is approaching.