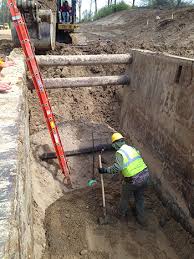 Close calls are routine for many construction workers around Oklahoma and the U.S. but one in Colorado recently led to proposed fines of $93,000.

The Greeley Tribune reported that OSHA inspectors were on hand reviewing a construction site managed by Alamosa-based RMS Utilities, Inc. The inspectors found 3 workers in an unprotected excavation that was nearly 13 feet deep. They ordered the workers out and minutes later, one of the walls of the deep trench collapsed.

OSHA cited RMS for one willful and two serious safety violations for failing to protect employees from cave-in hazards and keep the spoil pile at least two feet back from the excavation, the release states. RMS was also cited for allowing employees to work beneath an excavator bucket.