Another warning about parent-child wells

Tense times at the White House over biofuels 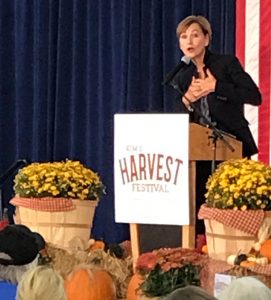 But Reynolds also recounted tense moments in the White House earlier this month as she and other Iowa officials asked the president to boost the federal ethanol production mandate.

“Maybe Senator Grassley was taking a little of the ‘bad cop’ thing, yeah, right to the left of the president. There was charts and there was slammin’ and there was, you know, laying it out on what we needed to do to go forward,” Reynolds said. “And then I turned to Senator Ernst and you cleaned house and I said: ‘Amen! That’s what we need to do.’”

Both of Iowa’s U.S. Senators attended the Reynolds fundraiser. Karen Pence, wife of Vice President Mike Pence, was the keynote speaker. Senator Grassley told the crowd Pence had played a key role in that Oval Office meeting on ethanol policy.

“We thought we were getting no place,” Grassley told the crowd, “and then the vice president speaks up in this quiet way and I said: ‘Bingo!’”

Senator Ernst did not add her perspective on that meeting when she addressed the crowd. Ernst did comment on the Democratic presidential candidates who spoke earlier Saturday in Des Moines.

“Oddly enough, it’s a steak fry,” Ernst said. “If you have read the ‘Green New Deal’ which all of them support, doesn’t that call for the elimination of cattle? They’re doing that one steak at a time.”

Ernst is running for reelection in 2020. Reynolds was just elected to a four-year term in 2018.