Even small acquisitions have to be reported to the SEC 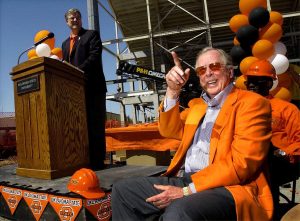 As much as he liked the color of oil—black—-legendary oilman T-Boone Pickens liked one other color maybe more…..orange as in Oklahoma State University orange.

Pickens, the man known as the Oracle of Oil died on Wednesday at his Dallas home. He was 91 and had been ailing since suffering some strokes in 2016, but still made attempts to attend Oklahoma State athletic events. The billionaire who was born in Holdenville and graduated from Oklahoma State University remained a “Cowboy” to the end.

Over the years, he contributed millions of dollars to the university’s athletic programs. And maybe it was fitting that Oklahoma State confirmed his death Wednesday afternoon.

It is with great sadness that we announce the passing of T. Boone Pickens on September 11, 2019. #RIPBoone https://t.co/w6bt9d22GL pic.twitter.com/PhCvOnOpfs

“The greatest Cowboy of them all has taken his last ride. It will never be the same again. We could never thank him enough for all that he did for our university.”

Holder added, “He gave us everything he had, and all that he asked in return was that we play by the rules and dream big. He was living proof that anything is possible if you’re wearing orange. ‘Great ride Cowboy, great ride!'”

“There’s much you can say about T. Boone Pickens and the impact he had on Oklahoma, but I will keep it simple: he embodied the spirit of Oklahoma and lived the American dream.”

“His work in not only oil and gas, but also wind energy, paved the way to the energy dominance we see today,” added the Senator.

While Pickens was known for his wealth, his generosity was equally known.

“I was put on this earth to make money,” Pickens once said, “and to be generous with it.”

He reportedly made donations of more than $1 billion during his lifetime and about half went to Oklahoma State University. His biggest contribution was the $165 million donated to the university’s athletic department.

Pickens graduated in 1951 from OSU and went to work for Phillips Petroleum. But he didn’t stay long and in 1956, founded his Mesa Petroleum based in Amarillo. In the 1990s, Pickens created the BP Capital hedge fund company.

In 2018, Pickens figured it was time to give up his $250 million Mesa Vista Ranch in the Texas Panhandle.

“Damn right, I’ll miss this place,” he said last year in an interview. The 100-square mile ranch has a main lodge that is more than 30,000 square feet in size. The dining room seats 40 seats. The property is so big, it has its own airport, chapel and fire trucks.

His boyhood home in Holdenville was moved to the ranch.

Pickens knew it was time to no longer be the hard-charging financier he once was. He shut down the hedge fund and also sold his Dallas mansion and planned to relocate his boyhood home to Stillwater.

Oklahoma Attorney General Mike Hunter commented, “Although he was known as an incredibly successful, self-made businessman and entrepreneur, one of the most impressive things I witnessed in my years of knowing him was his profound sense of generosity. Boone’s seemingly limitless charity over the years to different philanthropic endeavors will have a lasting impact on our state, and serve as an inspiration to future generations.”