Oil and Gas Expo only a few weeks away in OKC 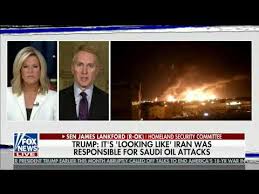 Oklahoma U.S. Sen. James Lankford makes no bones about it.  He feels confident Iran was behind the drone attack that literally cut in half the oil output in Saudi Arabia over the weekend.

“Iran has been the provocative actor in the Middle East for decades,” he said Monday night in an interview on the Martha McCallum show on Fox News. “And a lot of people just ignore the fact that that is who they are.”

Months after the actions of Iran prompted the President to send a battle force to the Strait of Hormuz following the seizure of oil tankers, Lankford says those actions were designed to see how far they could go.

“They were able to get away with it and now they have launched weapons and munitions into an oilfield to kind of take out the Saudi oilfields to see how far they could go,” added Lankford.

But he has concerns how Europe will respond.

“Iran has a lot of allies in Europe and if Europe continues to pacify Iran—we’ll get the same results that we’ve had for the last multiple decades from Iran.”

Some like Sen. Lindsay Graham believe the U.S. should launch an attack on Iran in response to the massive explosions and fires. Not Sen. Lankford.

But the Senator says it’s time to get tougher with Iran.

Lankford fears that if Iran gets a nuclear weapon, “It’s a game changer for us. So we have to stand up to them now to be able to stop this.”

The Republican Senator, who is a member of the Senate Committee on Homeland Security and Governmental Affairs contends the American people have lost track of the violence and terrorism funded and spread by Iran.

“Iran is a major funder of Hezbollah. Iran is funding Hams.Iran is the one providing explosive devices that killed many, many of our solders in Iraq. Iran is the group that is leading the civil war in Yemen and providing weapons to the Houthis there.

Click here to view the interview on Fox News.