Rep. Cole says US must defend allies from Chinese threats 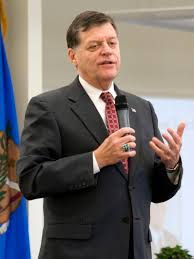 Oklahoma Congressman Tom Cole revealed he spent part of August traveling to Japan, Singapore, Australia and Fiji as part of a delegation on foreign policy and defense issues.

In a newsletter this week to his 4th district constituents, the Republican Representative explained it was a bipartisan delegation of lawmakers from the House and Senate. They met with diplomats from each of the countries and on the return trip stopped in Hawaii to visit with Admiral Philip Davidson, Commander of the U.S. Indo-Pacific Command which is the largest military theater in the world.

In his newsletter, Rep. Cole said he repeatedly noticed two common themes in the meetings with leadership in the region.

” First, there is a very real fear of Chinese aggression, especially since China has relentlessly built up its naval fleet and continues to flex its muscles in the South China Sea,” wrote the congressman. ” Second, support for the United States as an ally remains strong in the region. After hearing from our friends and allies abroad, I believe we must stand by them in the face of the Chinese – not only because it’s the right thing to do, but our friends’ freedom in the Pacific also yields benefits for the U.S. from a trade and military standpoint.”

The congressman discussed the trip and offered comments which can be viewed here.