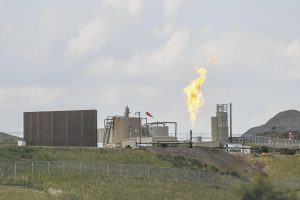 Flaring in North Dakota continues to exceed the state’s goals, but was still less than posted in last month’s oil and gas production report — despite the fact crude oil and natural gas production reached new heights.

North Dakota is a state where Oklahoma oilman Harold Hamm continues to make a fortune with his Continental Resources company in Oklahoma City. He was one of the early drillers who thought it was worth the risk to explore the Bakken.

Rigs showed the reverse trend. They were 63 in June, 57 in July and 62 in August. Monday, the state was showing 62 rigs in play.

Not including Fort Berthold — an area with particularly constrained capacity for gathering and processing natural gas — the capture rate was 81 percent.

Fort Berthold is running 14 rigs and has 2,212 active wells, with another 153 waiting on completion. There are 424 approved drilling permits.