Lawyer to do double duty at Oklahoma Labor Department 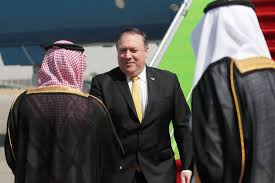 Secretary of State Mike Pompeo was in Saudi Arabia on Wednesday meeting with Crown Prince Mohammed bin Salman to discuss the attack on 2 important Saudi oil facilities on Saturday and to “coordinate efforts to counter Iranian aggression in the region,” per a statement.

Where it stands: Saudi officials said Tuesday that they’ll fully restore oil supply capacity by month’s end, and that half the 5.7 million barrels per day of production knocked offline in the weekend attacks is back.

Why it matters: The announcement— and an earlier Reuters report of the rough timeline — are putting downward pressure on oil prices, which had soared in the wake of the attacks against a major processing plant and oilfield.

What they’re saying: The Eurasia Group’s Ayham Kamel said in a note…