Nuclear storage site in New Mexico is close at hand 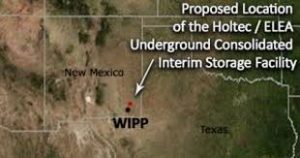 A New Jersey-based company is a step closer to building a multi-billion dollar facility  in eastern New Mexico to temporarily store spent nuclear fuel from commercial reactors around the U.S.

Holtec International announced it has reached a labor agreement with the New Mexico Building and Construction Trades Council to create a framework for cooperation between labor groups and management according to the Associated Press.

“The agreement with the council further cements the local contribution to the project and ensures that the local communities and the state of New Mexico will greatly benefit from it,” said Joy Russell, Holtec’s senior vice president and chief strategy officer.

The site would be located near the cities of Carlsbad and Hobbs, New Mexico.

While elected leaders in Eddy and Lea counties support the project, it has garnered fierce opposition from nuclear watchdog groups, New Mexico Gov. Michelle Lujan Grisham, members of the state’s congressional delegation and others.

Citing the lack of a long-term plan by the federal government for disposing of spent nuclear fuel, critics are concerned New Mexico will get stuck with the waste permanently.

State and industry officials also have concerns about potential effects on oil and gas development, as Holtec’s proposed site is located within the Permian Basin – one of the world’s most prolific energy production regions.

Holtec is seeking a 40-year license from federal regulators to build what it has described as a state-of-the-art complex near Carlsbad.

Company executives say the project is needed because the federal government has yet to find a permanent solution for dealing with the tons of spent fuel building up at nuclear power plants around the U.S.

Brian Condit, executive director of the trades council, said New Mexico can supply a steady and reliable source of skilled laborers for the project.

Holtec has said the site in New Mexico – about 35 miles from Carlsbad – is remote and geologically stable. The company also has said the four-layer casks that would hold the spent fuel would be made of thick steel and lead and transported on a designated train with guards and guns.

Holtec expects the Nuclear Regulatory Commission to decide on the license for the storage facility in 2021. If approved, construction could start soon after.