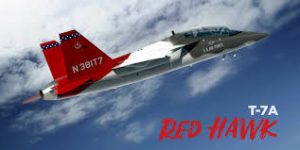 The timetable isn’t known but sometime in the future the Air Force’s new advanced trainer, the T-X, also named the T-7A Red Hawk will be flying in the skies over Oklahoma.

The Air Force announced this week the plane will replace the T-38C starting in 2023. The T-38s can be seen flying out of Vance Air Force Base in Enid as well as Sheppard Air Force base in Wichita Falls, Texas.

Acting Secretary of the Air Force Matthew Donovan made the announcement during his speech at the 2019 Air Force Association’s Air, Space and Cyber Conference in National Harbor, Md., on Monday.

“The name Red Hawk honors the legacy of Tuskegee Airmen and pays homage to their signature red-tailed aircraft from World War II,” Donovan said. “The name is also a tribute to the Curtiss P-40 Warhawk, an American fighter aircraft that first flew in 1938 and was flown by the 99th Fighter Squadron, the U.S. Army Air Forces’ first African American fighter squadron.” 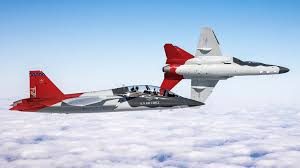 The T-7A features twin tails, slats and big leading-edge root extensions that provide deft handling at low speeds, allowing it to fly in a way that better approximates real world demands and is specifically designed to prepare pilots for fifth-generation aircraft. The aircraft’s single engine generates nearly three times more thrust than the dual engines of the T-38C Talon.

A $9.2 billion contract awarded to Boeing in September 2018 calls for 351 T-7A aircraft, 46 simulators and associated ground equipment to be delivered and installed, replacing Air Education and Training Command’s 57-year-old fleet of T-38C Talons.

The first T-7A aircraft and simulators are scheduled to arrive at Joint Base San Antonio-Randolph, Texas, in 2023. All undergraduate pilot training bases will eventually transition from the T-38C to the T-7A. Those bases include Vance Air Force Base, Columbus AFB, Mississippi; and Laughlin AFB and Sheppard AFB, Texas.