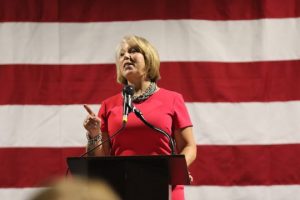 New Mexico leaders are creating a new group in connection with New Mexico State University to study the prospects of treating and reusing wastewater from fracking.

New Mexico Gov. Michelle Lujan Grisham announced the formation of a produced water “consortium” intended to research and develop polices related to the treatment, reuse and regulation of produced water, or waste water, generated by hydraulic fracturing according to the Carlsbad Current Argus newspaper.

Traditionally, water contaminated or produced during the fracking process is disposed of via injection wells that pump the water back underground.

The initiative was created as a partnership with the New Mexico Environment Department and New Mexico State University, with a memorandum of understanding signed by both organizations that would stay in effect until Sept. 30, 2022.

The Produced Water Research Consortium will be funded by donations from private companies, non-governmental organizations and state or federal agencies.

“Our state is continuing to take unprecedented steps forward to spur economic investment in furthering the science and technology associated with produced water and its potential treatment and reuse,” said NMED Cabinet Secretary James Kenney.

“Through this partnership, science will guide our regulatory decision-making with respect to produced water treatment.”

New Mexico Rep. Nathan Small (D-36) said the state law, which he cosponsored, could serve as a guide to the regulations developed by the consortium.

“As New Mexicans, we know water is our most precious natural resource. I sponsored this legislation to save fresh water by clarifying and strengthening the rules for produced water while promoting investment and innovation in treating produced water,” he said.

“I am grateful and excited to see this strong partnership between NMSU and NMED to provide the science we need to safely make decisions on the best ways to utilize recycled and treated produced water.”

Speaker of the House Brian Egolf said the partnership between NMSU and NMED will further bolster the State’s efforts to regulate produced water under HB 546.

“This session, we were proud to pass the Produced Water Act so we can have more transparency and accountability in the treatment and reuse of produced water resulting from oil and gas operations,” Egolf said.