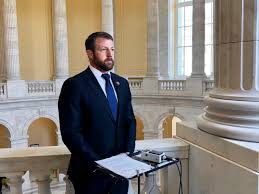 It’s called an “all-of-the-above American energy reform bill” and Oklahoma Congressman Markwayne Mullin was one of six Republicans in the House who introduced the measure this week.

Formally, it is called the American Energy First Act and is designed to expand domestic energy production on federal lands. In announcing the act, Rep. Mullin, who is co-chair of the House Energy Action Team or HEAT said it will create well-paying jobs for American citizens and lead to lower energy prices for consumers while generating billions of dollars for federal, state and local governments.

“Americans want dependable, efficient energy at a price they can afford. An all-of-the-above energy strategy accomplishes that goal while also providing good-paying jobs and growing our economy,” said Congressman Mullin. “We have an abundance of energy resources right here at home and we are able to harness them in a safe, environmentally-conscious way. I am proud to join my colleagues in introducing this bill that will move us towards an energy strategy that works for all Americans and makes us energy independent.”

“Our federal lands and waters have abundant natural resources that we are capable of harnessing in a safe and environmentally-conscious way. Through streamlining regulations and opening more areas to energy exploration, we can create thousands of new high-paying jobs, generate billions of dollars for local communities, and lower energy costs for American families and small businesses,”said Scalise.

“Going forward, I’ll continue to fight for the best interest of energy producers and consumers so costs are kept low and access to resources remains abundant. I’ll also fight against the absurd Green New Deal, and the efforts by Democrats to upend our economic system and abolish the energy industry our families and nation rely on,” said Cheney.

“Democrats are spinning their wheels promoting a trio of empty measures that serve only to pander. Their abhorrence of self-sufficiency is evidence of their belief that political points are more valuable than American prosperity. It is heartening to know that their obstructionist efforts will likely find no support beyond the toothless messaging votes cast by House Democrats,” said Bishop.