Latest producers are in Blaine and Grady counties

The retirement of those KC-135 tankers that fly over Oklahoma might not be happening as the Air Force originally thought.

Now a top general says it might be another three to four years before the new replacement, the KC-46 is fully battle-ready. The first of the planes arrived earlier this year at Altus Air Force base where crews undergo training.

But the military news website Defense One reports that problems with the new plane’s refueling system could prompt the Air Force to put off retiring 1960s-era KC-135 tankers that are supporting the U.S. military’s operations around the world. The KC-46 was supposed to be battle-ready in 2017, but numerous design and development problems have led to repeated delays and cost the plane’s maker Boeing more than $3 billion.

“I need to get this [plane] into the fight,” Gen. Maryann Miller, head of Air Mobility Command, the arm of the Air Force that oversees refueling and cargo planes, said Wednesday at the Air Force Association’s Air, Space and Cyber conference.

But the tankers will not fly combat missions until at least 2022, some 11 years after the Air Force selected Boeing over rival Airbus to build its next-generation refueling tanker.

The latest delays come as the office of the Pentagon’s inspector general announced it would investigate whether the Air Force followed its own engineering process in designing and developing the plane’s refueling boom.

“We are, in my opinion, making progress on seven of those,” she said. “Two are very difficult.”

Among them is a complex video system that’s supposed to help the boom operator guide the refueling probe into the receiving aircraft. On today’s planes, the airman simply looks through a window. On the KC-46, three cameras feed imagery to a computer that presents a merged picture to the operator at a console in the front of the plane. But operators are having trouble with depth perception on the screen, meaning the boom might appear closer or farther away from the plane behind the tanker.

“We have work to do. It’s complex,” Miller said. “Boeing knows that they have to meet all nine parameters. It’s a pass/fail grade for them.”

Air Force scientists at Wright-Patterson Air Force Base in Ohio are working with Boeing to fix the problem. Boeing will bring its proposed fix to the Air Force “within a couple months,” Miller said.

A former Air Force KC-46 program official said the service had long worried about Boeing’s ability to develop this kind of camera system.

“There were many, many other companies out there that could have done it better and they chose to do it in-house,” the official said. “We thought that was a risk.” 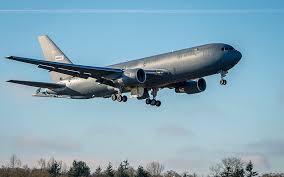 The new boom is also stiff, which makes it difficult for slow-flying planes, like the A-10 Warthog, to refuel. But the tab for that fix is on the Air Force; Boeing built it to service specifications laid out in the 2011 contract.

“The design is fairly well understood,” Jamie Burgess, Boeing’s KC-46 program manager, said in a Tuesday interview. “We’re going through the detailed design work right now and expect to have a detailed design that’s ready for testing about the middle of next year.”

The latest problem is with the clips, unique to the KC-46, that are supposed to hold cargo pallets and passenger seats to the floor. In Air Force testing, the twist locks that hold the clips to the floor slightly loosen, but did not unlock. Boeing is now figuring out how to fix the clips, which Burgess called “a fairly simple design solution.” In the meantime, the Air Force might have to secure cargo pallets with straps.

The plane also has about 500 less-serious problems, Miller said.

Despite the problems, the Air Force began accepting KC-46 deliveries in January, but has withheld nearly $28 million per plane. To date, it has received 19 aircraft and withheld more than $500 million from the company.

“We’re eight months into accepting our airplanes and Boeing has not presented a solution that has met all the parameters,” Miller said. “In a couple of months, that’s what I’m looking for. A pass-fail grade for Boeing on this.”

The Air Force has twice halted deliveries after crew found trash, parts and tools inside aircraft.

“We have all of the right procedures in place [but] some of our employees weren’t following the procedures as closely as they should,” Burgess said.

Boeing is now inspecting each plane for debris before it moves between stations on the assembly line, Burgess said.

“If a tool is misplaced on an airplane, everything stops and we find it,” he said.

The final 20 minutes of workers’ shifts are dedicated to cleanup. Smaller tools, including screwdriver bits, must be logged in and out.

“The amount of [debris] that is being found and removed from airplanes now is drastically higher than it was before,” Burgess said.

The most recent KC-46 delivered to the Air Force was free of debris, Miller said.