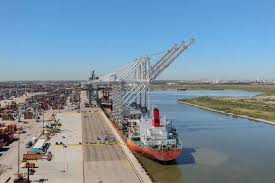 The increase in crude oil and produced gas and other exports and imports has forced the Port of Houston Authority to acquire three new electric cranes for the Bayport Container Terminal. It is considered to be critical for the expansion project of the Houston Ship Channel through which oil and gas tankers move.

The $35 million dockside cranes are for Bayport’s Wharf No. 5, while the expansion of the ship channel, the busiest in the United States, is needed for improved safety and the future growth of regional and national commerce.

Port Houston Executive Director Roger Guenther noted during a recent meeting that the growth experienced recently at the port is continuing.

“Operationally, our facilities have handled close to 30 million tons of cargo through August, an increase of 7 percent over last year as both container volumes and steel have maintained their upward trends in 2019,” Guenther reported.

The number of twenty-foot equivalent units or container TEUs handled through August totaled nearly two million, an increase of 11 percent compared to this time last year. Guenther said he expects to approach three million by the end of this year.

The channel widening, along with deepening in some sections, is the eleventh and next major ship channel expansion project. The last widening and deepening of the channel was completed in 2005.