3Q earnings report to be released by Phillips 66

Another warning about parent-child wells 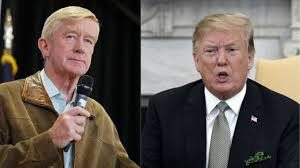 If you believe former Massachusetts Gov. Bill Weld, the oil and gas industry is making its dying gasps and won’t be around much longer.

Weld was the sole Republican at MSNBC’s Climate Forum on Friday and has not been asked the question about contributions from the oil and gas industry before.

The politician who has not been on any of the president debate stages, had some harsh words for the state of the fossil fuel industry in the U.S. saying the coal industry was “dead” and the oil industry was not far off.

“The coal industry has already died in this country,” Weld said at the forum. “It will only be a matter of a few decades before oil is a thing of the past.”

Weld painted himself as a Republican who stands up for the party’s historical tenets of prizing public lands, water and the environment — a drastic difference, he said, from President Trump.

“I’m the real Republican, not a Republican in name only,” Weld told forum moderators.

“It’s fairly recently that the party has drifted from that and the capstone of course, is President Trump saying climate change is a hoax.”

Weld said that unlike some of his party counterparts, he believes the dire science underlined in the United Nation Intergovernmental Panel on Climate Change report, and doesn’t understand the line his party has taken on climate change.

“Those poor folks down in Washington who are Republican office holders, they don’t know what hit them,” said Weld. “I don’t know whether they have Stockholm Syndrome and they identify with their captor or whether they are so obsessed with their reelection that they can’t think of anything else.”

If elected, Weld said he would champion a carbon fee, which he argues is not a tax because the government would not be withholding the revenue. He said he favored using the money collected to end the federal excise tax on gasoline or get payroll tax relief for low income families.

However, Weld said he has not bought into every environmental idea put forward by his Democratic counterparts — especially the Green New Deal.

“I do think the drafting of the Green New Deal is hopelessly unrealistic,” Weld said.

“When it says we’re going to offer everyone a guaranteed basic income from the new green jobs, irresponsive of if they are willing to work, that’s not going to fly in this country.”