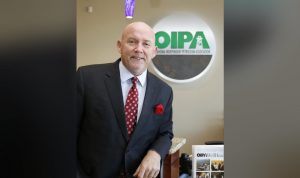 Tim Wigley, the former president of the former Oklahoma Independent Petroleum Association died this month after a brief fight with cancer. He was 56.

He also worked as head of the People for the West in Pueblo, Colorado and was president of the Oregon Forest Industries Council.

Wigley resigned as President of the OIPA in June 2018 after the group’s annual meeting in Las Colinas, Texas. Five months later, the OIPA and the Oklahoma Oil and Gas Association merged into the  Petroleum Alliance of Oklahoma.

His obituary stated that he died in Arlington, Virginia after a “short battle with adenocarcinoma, a type of metastatic cancer.” He is survived by his wife, Melissa Simpson and children London and Rook Clark.