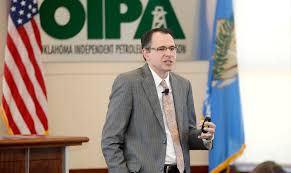 Many Oklahomas are out of work and the economy is hurting.

Mainly because the oil and natural gas industry, the largest source of the state’s tax revenue is also hurting.

Evans says he’s concerned due to the continuous decline in drilling rigs across Oklahoma.

“I do think as you follow rig activity and you follow energy industry activity, you’re really getting a leading indicator of future state economic conditions,” said Evans.

Today, there’s 80 active rigs, compared to the 141 a year ago, which is something none of Oklahoma’s peer-energy producing states have seen this year.

When rigs are up and running, there’s more jobs and workers, meaning more Oklahoman’s are putting dollars back into the economy.

“Anytime you see rig activity the way it is, you know it’s affecting the regions that are not having the drilling taking place,” said Evans. “It’s affecting those diners, those hotels.”

The oil and natural gas industry hopes this grabs the attention of lawmakers before the ripple effect from drilling activity takes place.

“I’ve been pleasantly surprised that the state has managed to bounce along somewhere above recession for as long as we have,” said Evans. “I’m very much worried about downside risk.”

Source: The Petroleum Alliance of Oklahoma

Editor’s Note: The story from the Alliance was written prior to the release of Oklahoma’s latest rig count of 75.