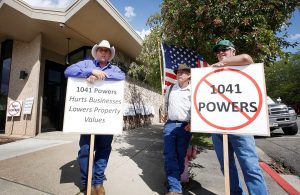 Across the country, local governments are taking stands on energy issues. Some controversial. Some anti-fossil fuel in nature.

In Durango, Colorado some of the residents of La Plata county voiced opposition to the county considering adopting so-called 1041 regulations that under the 1974 law give local governments more control over energy projects. Especially big ones.

“The community hardly knows anything about it,” said Dan Percell, one of the protesters.

For the past year, La Plata County has been considering adopting some 1041 Regulations. The Board of County Commissioners held a hearing Tuesday on the proposed regulations, where residents who showed up voiced overwhelming opposition.

The state created the law at the request of counties, said County Commissioner Julie Westendorff.

“Counties felt like the state was not making decisions with local input,” she said.

Now, 60 of Colorado’s 64 counties have adopted some part of the 1041 Regulations, which essentially function like a permitting process.

Out in California, it’s a slightly different story.

With an abundance of natural gas across the U.S., San Jose, California has moved to ban natural gas in most new residential buildings beginning next year.

The city council and Mayor Sam Liccardo decided in a unanimous vote to reduce greenhouse gas emissions by favoring appliances that run on renewable electricity sources over those powered by natural gas.