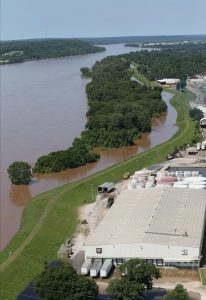 Four months after deadly flooding along the Arkansas River in eastern Oklahoma, the U.S. Army Corps of Engineers has released a study on the safety of flood levees in Tulsa County.

The study fills 161 pages of recommendations regarding the levees that prevented even more extensive flood damage in Sand Springs and parts of some Tulsa neighborhoods. The Corps suggests the construction of 13 more miles of levees at an estimated cost of up to $250 million. It also suggests the rebuilding of seven pump stations and the addition of two detention ponds.

The federal government would pay for 65% of the estimated cost.

Click here to read more in the Tulsa World.