Amazon prepares to open new air hub in Fort Worth

An Australian energy company has been drilling exploration wells in far West Texas in an area populated by more cattle than oil wells.

The area where Helios Energy Limited claims to have found signs of oil is not in the Permian Basin but in an area of rural Presidio County, Texas. The company has drilled four oil wells to date in the 20,000-acre area near the town of Marfa and one might enter full production in the coming weeks according to a report by Courthouse News.

Marfa attracts more artists and visitors interested in the Marfa lights than it has wildcatters in recent years. 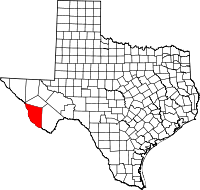 The region’s complex geology makes oil hard to find, and even when it is there, the economics don’t always justify sucking it out of the ground. Helios’ initial plans call for leasing almost 47,000 acres in the area.

Presidio County, where Helios is exploring, has produced just 2,406 barrels of oil since 1993, according to records from state regulators. That pales in comparison to the more than 700 million barrels produced in Midland County, in the heart of the Permian Basin, over that same time period.