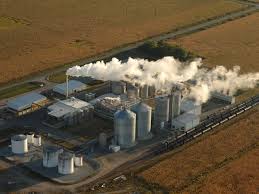 Uncertainty from the Trump administration about the future of ethanol production has resulted in a second Iowa ethanol plant shutting down production.

The Siouxland Energy, a farmer-owned cooperative in Sioux Center. Its board of directors “decided to halt production” and a written statement blamed the Trump Administration’s waivers so ethanol doesn’t have to be blended in gasoline produced at what the board said were “many large oil refineries.”

Siouxland Energy’s board president says the actions have “unfairly” benefited the oil industry at the expense of farmers and, “if not addressed soon, will impact the livelihoods of many.”

As The Des Moines Register first reported, this is the second ethanol plant to cease production. The first was Plymouth Energy, also in northwest Iowa. The closures at both Iowa ethanol plants are temporary, at this point.

The Sioux Center plant was annually buying 23.5 million bushels of corn from farmers in the area each year and has 42 employees on its payroll.