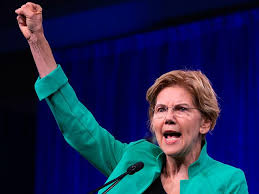 When Sen. Elizabeth Warren, a Democratic presidential hopeful who grew up in Norman, Oklahoma announced she would ban fracking if elected, it caught more than a few heads in the oil and gas industry.

Political observers, such as Amy Harder at Axiom News found it pretty surprising too. Here’s what she reported on Monday:

Sen. Elizabeth Warren is moving more aggressively to the left on energy as she battles Sen. Bernie Sanders for backing from progressives in the Democratic 2020 primary.

Driving the news: On Friday afternoon, Warren tweeted that if elected, she would ban fracking “everywhere.”

One big question: An obvious but important one is whether Warren’s “ban fracking” position would be a political liability if she was in a general election matchup against Trump.

But, but, but: This is hypothetical politics right now. Warren can’t ban fracking “everywhere” without Congress, which isn’t in the cards. Her campaign acknowledges that banning it would require legislation.

Another big question is what a theoretical ban would mean for greenhouse gas emissions. I’m outsourcing this to Carnegie Mellon University’s Costa Samaras. He posted an interesting Twitter thread on Friday night (paaaarty!).