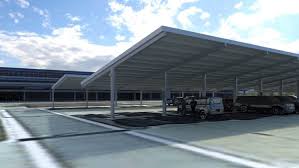 One airport in Indiana has come up with the idea of solar canopies that are used to not only generate electricity but protect cars in the airport parking lot.

The Evansville Regional Airport is in the process of constructing canopies over hundreds of parking spaces. The canopies will hold nearly 4,000 solar panels that will generate enough electricity to meet nearly half of the electricity use in the passenger terminal.

Airport director Nate Hahn says the solar project follows steps to add LED lighting, increase recycling and improve heating and air conditioning efficiency. The airport anticipates the $6.5 million project will pay for itself in electricity savings over the next several years.

The canopy will cover about 400 spaces in the airport’s short-term and rental car parking lots. Officials expect work on the canopy and the solar panels will be finished by the end of February.