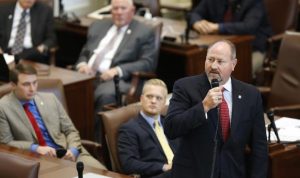 There is nothing illegal about what Wallace is doing and there is no violation of state ethics rules. But the paper quoted Common Cause official Beth Rotman as stating the arrangement gives the appearance that a special interest group may have outsized influence over legislative actions.

“When you have powerful policy makers literally sharing living space with people whose paid role it is to influence policy, things look way too cozy,” she said.

As the Oklahoman reported, Wallace started renting the apartment before Miller, the former State Treasurer, became a lobbyist for OGE.

“I’ve known Ken for a long time. Ken’s Ken. It doesn’t matter the title he’s wearing. Basically, it’s a very convenient, close access to the Capitol place for me to stay when I need to sleep overnight when we’re in session and when I’m up for meetings.”

Click here to read the story at The Oklahoman.