Google’s impact on city of Pryor 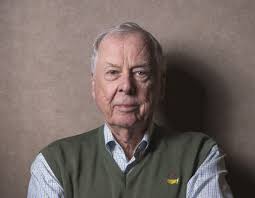 Venerable oil baron Boone Pickens is giving up on oil — sort of.

Less than 18 months ago, his fund launched an exchange-traded fund tracking stocks of companies expected to benefit from any increase in Brent crude oil prices. But soon, BOON — the ticker of the NYSE Pickens Oil Response ETF — will be no more. Instead, it will be relaunched as RENW, offering exposure to stocks benefiting from the transition to toward “a low-carbon economy.”

BOON’s most obvious problem was that it hadn’t really lived up to its ticker as far as investors are concerned. Underperforming the Brent oil price by about 7 percentage points since launch isn’t catastrophic. Worse perhaps is the fact that the ETF didn’t really partake in last fall’s oil rally (less than half its holdings are classified as “energy” companies). Still, that shielded it somewhat from the subsequent crash, unlike more heavily exposed E&P funds.

Move past the symbolism, and there’s a simpler tale here.

Not too long ago, the E&P sector had a shortage of oil and a trove of trust. Today, those positions are entirely reversed. Buoyed by the peak oil scare of the prior decade, investors funded a drilling spree, including in U.S. tight-oil basins. The result is a languid oil market barely able to rouse itself even when conflict threatens in the Persian Gulf. Return on that investment bled away to bad bets, cost-inflation and, all too often, fattened pay and perks in the c-suite. Meanwhile, Big Tech (among other sectors) competes successfully for investors’ interest. Less than a decade ago, pundits speculated on the meaning of Apple Inc.’s market cap tentatively overtaking Exxon Mobil Corp. to be the biggest in the world. Now, it is just normal that Exxon isn’t even in the top 10 (it is 13th right now).

Despite oil prices more than doubling since the trough of early 2016, energy’s weight in the S&P 500 Index has actually slipped further, from more than 6% then to an all-time low of about 4.8% today.

That relationship between energy’s weight and the oil price over the long term reveals a sobering trend for the industry.

For most of the two decades leading up to 2000, the relationship was pretty stable, as oil prices fell in real terms from the spike of 1979, and the sector’s relative value drifted down with it. That changed as the supercycle took hold after 1998. Oil equities rallied strongly — the sector more than tripled by mid-2008 — though not as much as the underlying commodity. That makes sense, as cyclical rallies, even daubed with the motto of “peak oil,” aren’t expected to last forever, and cost inflation within the business was becoming quite evident by 2006.

The real oil price demanded to support the sector’s place in the index has kicked into overdrive this decade. That is also partly a reflection of the underlying commodity, as rallies since 2014 have faded quickly amid excess supply.

But it’s also due to that shortage of trust. Investors have been conditioned to expect energy firms to allocate any windfall from rising oil prices to drilling budgets, M&A or executive pay, with precious little making its way back to shareholders. Also, unlike in the early 2000s, they now worry more about “peak demand” and climate change (hence, RENW’s imminent emergence from BOON’s chrysalis). So it takes a lot of dollars per barrel to persuade them there will be some left over for distributions.

That is changing as some companies, particularly at the bigger end of the scale, have adopted strategies prioritizing payouts explicitly. The deficit is large, however.

For example, ConocoPhillips has been the exemplar of putting returns over growth in the past few years.

However, its stock actually traded down on Tuesday morning after reporting capital expenditure came in about $200 million above expectations in the second quarter — despite twinning that with a $500 million bump to share buybacks.

Yet Conoco’s playbook remains sensible. If energy stocks are proving unresponsive to oil then, like Boone Pickens, it’s time for a radical change of approach.