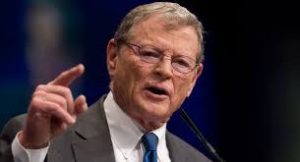 Oklahoma U.S. Sen. Jim Inhofe is blunt in his response to the corn industry’s criticism of Renewable Fuel Standard waivers granted by the EPA to 31 refineries in the U.S.

Here’s how POLITICOS’s Morning Energy Report noted what the Senator had to state.

The Trump administration is considering reallocating the volumes of ethanol that were reduced when it allowed dozens of refineries to waive their Renewable Fuel Standard requirements to blend the biofuel with gasoline, four industry sources with knowledge of the discussions told Pro’s Eric Wolff . “EPA, with our federal partners, including USDA and the Department of Energy, continues to implement the Renewable Fuel Standard program in accordance with the Clean Air Act, taking into consideration additional direction from Congress, recommendations from DOE, and relevant court decisions,” a spokesperson said.

Sen. Jim Inhofe responded to Eric’s story on Twitter: “The Big Corn lobby is pushing to increase the price of filling up our tanks. What they want won’t even increase the demand of ethanol. Enough is enough. If POTUS wants to help ethanol expand its markets, he could give them credits to export. This will help w/o burdening consumers.”