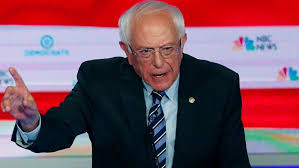 Democratic hopefuls once again only discussed their climate plans briefly Tuesday night, but the discussion managed to span issues including the Flint, Mich., drinking water crisis to a declaration by Sen. Bernie Sanders that the fossil fuel industry is criminal.

“We’ve got to ask ourselves a simple question: What do you do with an industry that willingly, for billions of dollars in short-term profits, is destroying this planet. I say that is criminal activity that cannot be allowed to continue,” Sanders (I-Vt.) said according to a report by POLITICO.

The response came after more than an hour without a specific climate question. Former Maryland Rep. John Delaney was the first to get a chance to respond to a climate question, by calling for a direct air capture market and panning the Green New Deal as unrealistic. Ohio Rep. Tim Ryan, meanwhile, called for “a sustainable and regenerative agriculture system that sequesters carbon into the soil,” and Massachusetts Sen. Elizabeth Warren highlighted a “green industrial policy” plan that “takes advantage of the fact that we do what we do best, which is innovate and create.”