Colorado mulls a special fund from oil and gas taxes 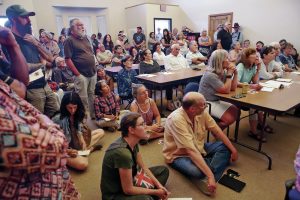 An environmental fight is brewing in a community not 15 minutes from Santa Fe, New Mexico. Residents of the small town of Pecos are banding together to fight an Australia mining company that has already won approval to begin tests to see if the area is ripe for a major mining operation.

The Santa Fe New Mexican had the following report about the fight.

PECOS — Sitting in the back row of the Pecos Community Center on Thursday night, longtime resident Judy Allison watched intently as 125 or so of her fellow villagers began laying out battle plans.

“Yeah, they’re gonna fight,” said Allison, who has lived in Dalton Canyon near Pecos for over 50 years. “There’s no question about that. And they’re trying to get as many people as possible in their army.”

The community meeting was initiated by the Upper Pecos Watershed Association, which is poised to take on the Australian-based New World Cobalt and its American subsidiary, Comexico LLC — mining outfits that already have received permission to conduct exploratory mining operations on a 2-acre spread of Santa Fe National Forest land near Terrero, (spelled Tererro by many of the locals), north of Pecos.

According to New World Cobalt’s website, the company is looking for copper, zinc and gold in the area.

The impending battle less than a half-hour from Santa Fe is a story nearly as old as the West itself: Locals facing off against those they consider interlopers in a bitter conflict over the environment, land and water rights, and money.

Lela McFerrin, vice president of the Upper Pecos Watershed Association, said the group is worried about “the water quality coming out of the watershed, which impacts all the water from here all the way down to Texas. Obviously, we don’t need acid in the water.”

There may be cause for such concern. Earlier this year the Associated Press reported millions of gallons of water loaded with arsenic, lead and other toxic metals were flowing from contaminated mining sites and into nearby streams and ponds without being treated in at least nine states. New Mexico was not one of them.

Mike Haynes, general manager and CEO of New World Cobalt, said he thinks “hysteria and misinformation” are clouding residents’ perspective. He said the holes the company plans to drill during the exploratory phase “are no different than drilling water holes in someone’s back yard.”

Haynes said his company wants to see if there is “an economic quality of mineral resources” to see whether it justifies building a mine in the area.

He estimated there is a “one in 200 or one in 300 chance that there is enough mineralization there to look into a mining feasibility study.”

Under the terms of the General 1872 Mining Act, Santa Fe National Forest officials cannot stop the operation. But they can require New World Cobalt to implement protective measures for the forest.

Terrero began as a mining town in the late-1800s. Mining operations continued through the end of the 1930s. The mine has been largely abandoned since. But some Pecos residents still recall the 1991 contamination of their water when a heavy snow sent leftover mining waste running into rivers and streams.

The residents of Pecos, a village of some 1,300 residents located about 25 miles southeast of Santa Fe, said during the meeting they are fighting for the trees, water and wildlife .

They discussed a number of obstacles they can put in place to slow things down, including a push for public hearings, political pressure from state lawmakers, lawsuits and appeals.

“There’s a lot of tools at our disposal,” said Rachel Conn of Amigos Bravos, a nonprofit water conservation organization.

Conn was one of several presenters who spoke during Thursday’s event, designed to educate the community about the mining plan and to devise a plan of action.

Charles de Saillen, a staff attorney for the New Mexico Environmental Law Center, told the group the last thing any mining company wants is “to deal with a bunch of irate citizens and their lawyers.”

Paula Garcia, executive director of the New Mexico Acequia Association, told villagers their most powerful weapon is their water rights. Working the crowd with some role-playing theatrics, she asked attendees what they would say to any mining company that approached them to buy water rights.

“Hell, no!” the assembly said in unison.

In a telephone interview from Australia, Haynes said Pecos residents have the right to protest.

“They obviously dislike what we are doing — but we have the right to operate in this area,” he said.

He said mining regulators for the country and state will provide “stringent oversight” on the project, beginning at the exploratory stage.

The Environmental Protection Agency must approve all mining requests on federal lands. Julie Anne Overton of the Santa Fe National Forest said in an email it is not yet clear to forest officials what level of EPA analysis the New World Cobalt operation requires.

She said New World’s stated timeline for conducting the project — scheduled to begin in the third or fourth quarter of 2019 and last up to five months — “is not realistic. That said, I can’t tell you what a realistic time frame would be.”

Haynes said he could not comment on the timing of the project as it moves through the review stage.

De Saillen and others at the meeting said the state’s Energy, Minerals and Natural Resources Department has agreed to hold a public hearing this fall on the issue so both sides can present their case. Haynes said that is “probable” and if it happens, “I hope we would have the right to be present.”

For Judy Allison, it’s enough that people came together for one night to learn about the plan.

“I’m encouraged that there were so many of us,” she said. “We’re getting informed.”