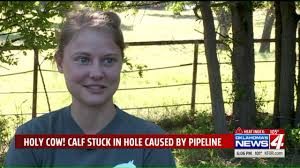 Channel 4 TV reports a Luther family said a calf has survived a fall into a hole on their property but that’s just the tip of the iceberg of a problem they’ve been facing.

A longtime News 4 employee alerted us to the safety hazard that she and her family have been watching develop for several years now. It involves a natural gas pipeline stretching for miles across eastern Oklahoma County.

They said holes have been popping up on the property and, over the years, people, vehicles and now a calf have fallen in.

The calf, weighing about 300 pounds, became stuck in the hole.

The calf’s mother first alerted Hayden Mohr and his family to the problem.

“We heard the cow bawling, and looked for it for a little while and then never could find it,” Mohr said.

Days later, Mohr’s father finally found the calf trapped in the deep hole without food or water in the summer heat.

“I brought some stuff down there just in case, but it seemed spunky enough that we were able to save it and it’s been doing fine with its mom,” said Emily Roberts.

Mohr’s family has been leasing the land for more than a decade.

An ONG pipeline maintained by ONEOK runs under it and, over the last 2.5 years, the Mohrs said the holes keep opening up on their property.

Over the years, people and vehicles have fallen in and, now, the calf, a crucial part of their business – swallowed by the earth.

ONEOK was out filling the holes when our crews were there Monday.

A spokesperson told News 4, during previous calls, “it was determined that no repairs needed to be made at the time,” adding the heavy rainfall this year hasn’t helped.

The company said they are committed to maintaining good relationships with landowners along their pipelines and will continue to monitor the area.

Meanwhile, the family is just hoping they don’t have to call ONEOK again.

“As I understand it, we did respond to previous calls, and it was determined that no repairs needed to be made at that time. These areas have expanded and worsened recently as a result of the heavy rainfall experienced this spring and summer.

We are committed to maintaining good relationships with landowners along our pipelines. We’ve been operating pipelines in Oklahoma for more than 100 years, and we place great value on being good neighbors and taking care of our landowners.

We have workers bringing in dirt today to fill in the eroded areas, and we expect to complete the repairs by this afternoon. We will continue to monitor the area to ensure the issue doesn’t come up again.”