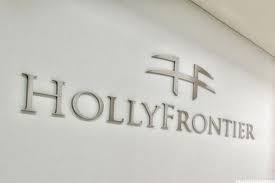 The company owns and operates a refinery in Tulsa, Oklahoma along with others in El Dorado, Kansas and in Utah and New Mexico.

The second quarter results reflect special items that collectively decreased net income by a total of $175.4 million. These items include a lower of cost or market inventory valuation adjustment that decreased pre-tax earnings by $47.8 million, a goodwill impairment of $152.7 million and Sonneborn acquisition and integration costs of $3.6 million. Excluding these items, net income for the current quarter was $372.3 million ($2.18 per diluted share) compared to $258.9 million ($1.45 per diluted share) for the second quarter of 2018, which excludes certain items that collectively increased earnings by $86.6 million for the three months ended June 30, 2018. Total operating expenses for the quarter were $333.3 million compared to $296.2 million for the second quarter of last year.

HollyFrontier’s President & CEO, George Damiris, commented, “HollyFrontier’s solid second quarter results were driven by strong gasoline and diesel margins across our company. Our healthy free cash flow generation allowed us to return over $245 million in cash to shareholders through regular dividends and share repurchases. With no major planned downtime until late September, we believe our refineries are well positioned for strong operational and financial performance in the third quarter.”

Our Lubricants and Specialty Products segment reported adjusted EBITDA of $28.8 million, despite weakness in the base oil market. Rack Forward adjusted EBITDA was $64.2 million for the quarter, driven by improved finished product margins.

HollyFrontier also announced that its Board of Directors declared a regular quarterly dividend of $0.33 per share. The dividend will be paid on September 4, 2019 to holders of record of common stock on August 22, 2019.