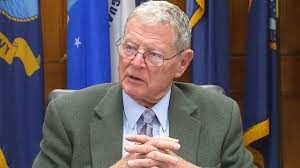 U.S. Senator Jim Inhofe (R) of Oklahoma made a stop in Oklahoma City at Kratos Defense Monday, August 12, to push a bill, he said, will encourage workforce development.

Senator Inhofe’s bill would help to pay for high tech and high paying jobs like those at Kratos.

Inside the 100,000 square-foot plant, some of the most high-tech unmanned jet drones in the world are built. Over the next three years, Kratos Defense plans to hire 350 to 500 people to build them. But those potential employees need high tech training.

Senator Inhofe held the press conference at Kratos to garner support for a bill he is pushing in Washington. It would expand the tax-free education savings plans to include tech schools; direct grants to encourage students to learn construction trades; and reimburse military spouses for some training.

A recent poll ranked Oklahoma among the worst in the country in workforce and education.

“First of all, I had not heard what you had suggested here that we’re not doing very well, but it does make sense. If you’re concerned about the workforce problem that we have, that’s the reason that we’re doing it,” said Inhofe.

“People are going to be employed here, because we have full employment. But we’d like to increase,” continued Inhofe.

Inhofe admitted it may be difficult to get his bill passed in the Democrat controlled House.

News 9 asked Inhofe how much his plan would cost. He said he doesn’t know; it hasn’t been scored, that is, that figure hasn’t been determined.

“There would be a cost to that, but that cost would be offset by people who are going to make higher salaries,” he said.